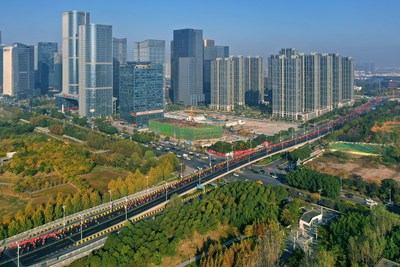 Yiwu Marathon has been running for 6 years, with a continuously improved racing level. In 2019, Yiwu Marathon won the title of Gold Medal Event of China Athletics Association.

Themed as “New Silk Road, Start to Run”, the event has attracted over 10,000 runners. Apart from the classic routes of previous years, the Yiwu Botanical Garden stage has been added. After passing through Yiwu Port, the contestants will come to Yiwu Botanical Garden from Xicheng North Road, traveling 4 kilometers in the “City Green Lung”, and then follow the main road, Shangcheng Avenue back to the finish line.

The newly-added botanical garden stage is a featured spot to promoting Yiwu. Runners can see that Yiwu is not only a big wholesale market, but also a happy city that is livable and enjoyable. The marathon has been demonstrating the image of Yiwu as a “Free Trade Zone” city, promoting the integration of Yiwu’s business and sports, and bringing new vitality into the development of Yiwu.

Yiwu is not only the world-renowned commodity capital, but also a booming modern city. Today, Yiwu has connected to more than 2 million small, medium and micro enterprises, more than 20 million industrial workers across the country, and connected to trillion-level business entities.

As one of the important windows of China’s reform and opening up, Yiwu has established trade relations with more than 200 countries and regions. The 13,052-kilometer-long Yiwu-Xinjiang-Europe train are carrying tens of thousands of Yiwu goods, which are sold all over the world.